What does the recent ISO 14644-1:2015 update mean for pharmaceutical cleanroom classification?

In its first major revision since the original release in 1999, ISO 14644-1 was updated and approved as an International Standard in October 2015 and published in December 2015. This blog aims to provide a brief overview of the changes, but more importantly, how the changes affect the current PIC/S Guide to GMP for Medicinal Products – Annex 1 Manufacture of sterile medicinal products (PE009-12) and the average pharmaceutical cleanroom including:

The 2015 updates to ISO 14644-2 relating to monitoring and reclassification should also be considered in conjunction with this blog.

Below shows the illustrative table (derived from the formula) from ISO 14644-1:1999. The particular rows and columns that are of most interest in the pharmaceutical industry have been shaded. The table also highlights the particle concentrations that have been removed from the 2015 version of the standard in orange. 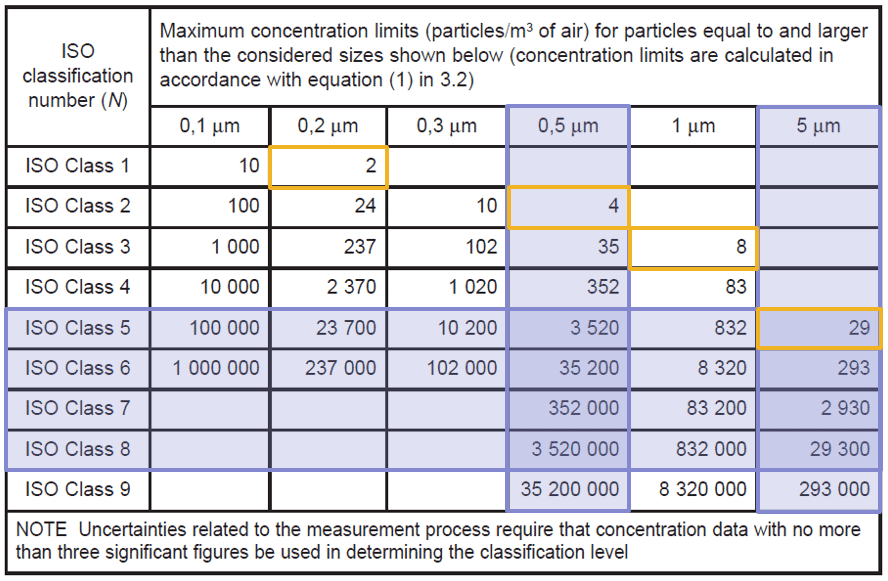 “The reasons for these changes are related to the re-evaluation of the sensitivity of airborne particle counters and their ability to count small concentrations, and in the case of particles ≥5.0µm the collection efficiency has been reconsidered.” – Gordon Farquharson, Convenor ISO TC209 WG1 (Cleanrooms and associated controlled environments)

Based on the updated ISO class classification table in ISO 14644-1:2015, the following highlighted Annex 1 ‘maximum permitted particles’ now fall outside the ISO classification system and therefore should not be used for formal classification:

The ISO 14644-1:2015 standard describes any particle with an equivalent diameter ≥5.0µm as a macro-particle. Where a regulatory agency demands consideration of these particles, the counting and sizing of these macro-particles is expressed using the M descriptor in the format:

For example, the Grade A at rest concentration of 20 particles/m3 @ ≥5.0µm would be expressed as:

The new M descriptor will be used to define the Annex 1 Grade A and Grade B and by using the existing ISO 14644-1 designation of airborne particle concentration (expressed as ISO Class number; occupancy state; considered particle size(s).

Annex 1 refers to ISO 14644-1 for the purpose of room classification including the number of sample locations and the sample size required. The 2015 version has seen an update to classification and sampling, the impact of which is an important change to the fundamentals of classification. The changes will require organisations to redefine their classification sampling plans and data evaluation.

ISO 14644-1:2015 has been simplified in regards to sampling and classification.

Key highlights of the changes:

Note: A formula is still applicable for cleanrooms >1000m2. 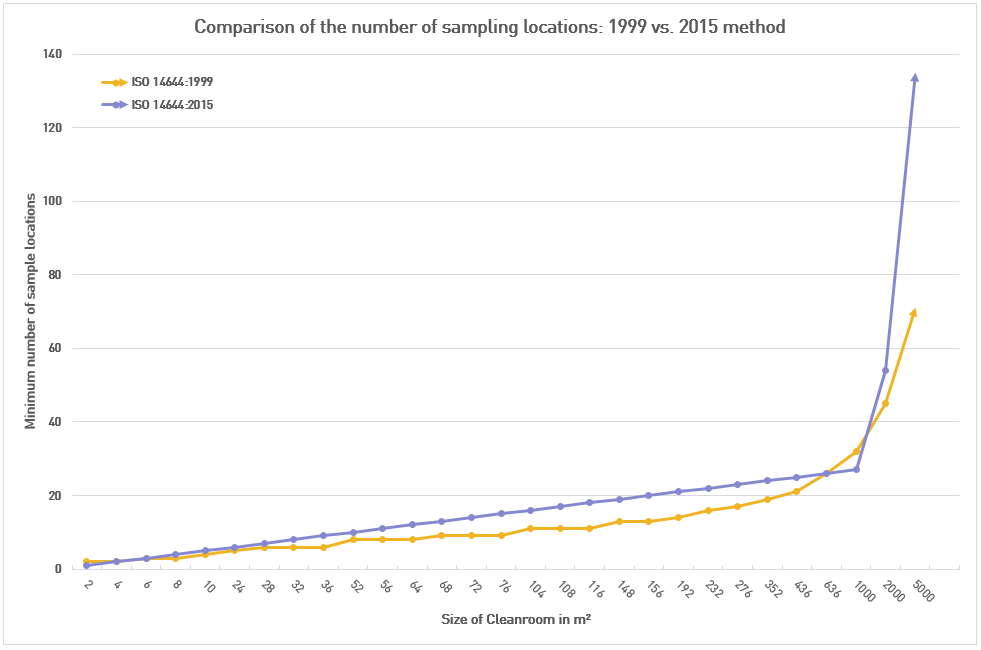 March 2015 saw a concept paper released jointly by the European Medicines Agency (EMA) and PIC/S that detailed the updating of Annex 1. While we are not certain what the update to Annex 1 might contain at this stage, we anticipate it will accommodate the 2015 revision of ISO 14644-1 and ISO 14644-2. Will this mean the removal of the ≥5.0µm limit from the classification of Grade A and B rooms? Perhaps it will retain ≥5.0µm for real-time monitoring. These issues and other hot topics will be discussed in detail at the annual GMP and Validation Forum.